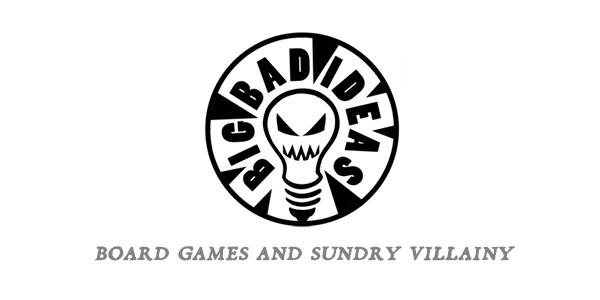 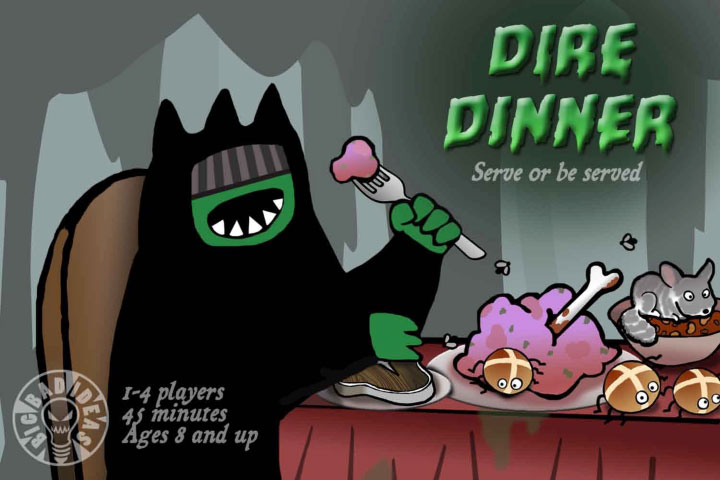 Dire Dinner    (scheduled for Kickstarter in 2021)

Dire Dinner is a cooperative tile-laying game where players attempt to prepare a feast for evil duke Gurth the Odious. Each turn, a team of selected minions with different skills and abilities must draw from a stockpile of ingredients, prepare them, and plate them, trying to finish one dish per turn, as Gurth grows hungrier and hungrier. The game involves tile placement, resource management, and unique character/ability cards. Either you feed Gurth, or you're Gurth food.

The game has been in play testing since 2020 and discussions are underway with our manufacturer. We are tentatively on track for a Kickstarter launch sometime in 2021.

A mighty interstellar empire picks the wrong planet to colonize when they stumble on the planet of the Overlord. Players each try to build a working flying saucer to escape the planet, while being constantly attacked by weird and magical monsters and troops.

This game is in the early prototyping stage.

In Doom Floof, the cutest and meanest small dogs in the land are gathering together to create a Legion of Doom suitable to serve the Overlord. Using worker placement and resource management, players try to gather the weapons, materials and upgrades to build a Legion worthy of a Dark Lord.

This game is in the early design stages.

The Overlord's court is a tough place to survive. Players compete with one another to gather resources, backstab others, and improve their reputations to become the newest Duke.

This game is in the early design stages.